Hot off the press this week is Anorak Magazine 10th anniversary special. Being commissioned by the lovely and extraordinary Cathy Olmedillas to illustrate both the front and back cover for this celebratory PARTY themed issue has got to be one of my favourite commissions ever. 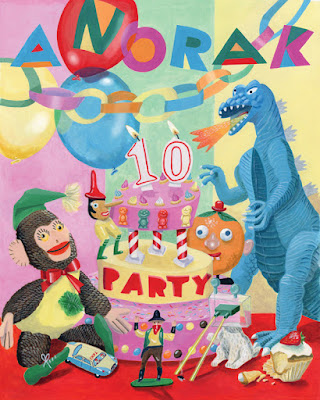 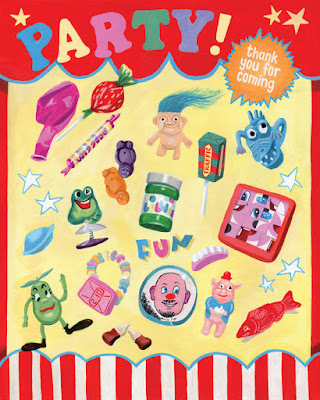 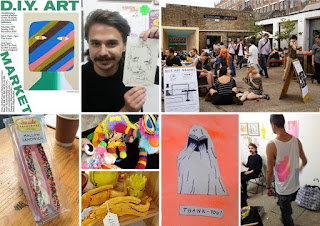 Hero was at the DIY Art market in sunny Peckham. I decided to do some 'blind portraits' to amuse myself and ended up with a queue all afternoon - exhausting!
Posted by WET PAINT Studio at 12:39 No comments: 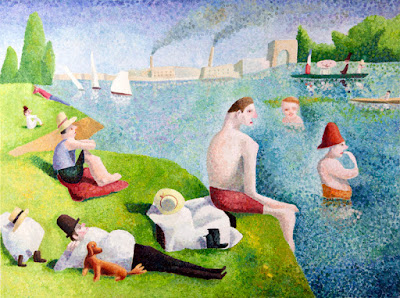 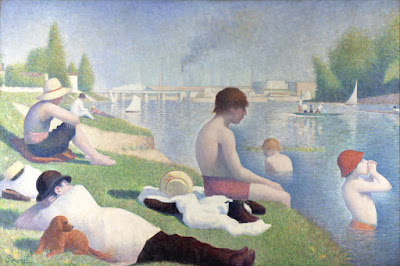 Just finished my pointillist (using cotton buds) tribute to Seurat's Bathers at Asnieres for this years Hero of Switzerland show, Arty Farty at the 5th Base Gallery next weekend. 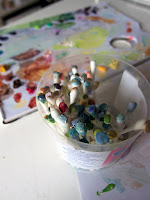 Posted by WET PAINT Studio at 03:32 No comments: 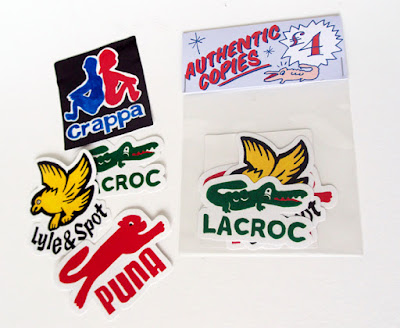 ahead of Brighton Illustration Fair this weekend, Authentic Copies - my new sticker pack inspired by my local (Walthamstow) market, where they sell fashion-wear copies and avoid legal issues by altering/ adding a letter to the brand name as in Brenetton jeans - always makes me chuckle. Heroes had a stand - come and say hello.
Posted by WET PAINT Studio at 03:01 1 comment: 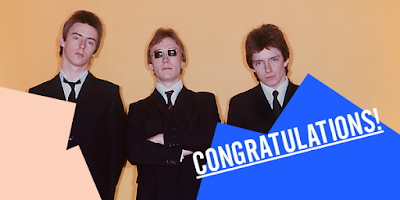 My sleeve art got into Secret 7". Sorry, I can't show you because it's secret.
Posted by WET PAINT Studio at 04:58 No comments:

Collage College workshop organised by the guys at Secret 7". Nick Scott kicked off with an informative and inspiring presentation on the history of collage incorporating loads of great visual examples; but more importantly, effectively communicated the very essence of it's existence - not bad for a Sunday morning.
The atmosphere at the Sonos studio was 'easy like Sunday morning' relaxed with a real sense of mischief in the air paving the way for some creative fun.
I then spent the next six hours in some sort of demented creative bubble, cutting, sticking and playing with bits of paper like a child possessed. I have given this rather extreme reaction some thought, and concluded this to be either a reaction to the fact that demands have prevented me from doing anything creative since the new year and/ or I was having a really great time.
I managed to finish ten pieces of varying success with a few that seemed to work well enough to enter for the secret 7" sleeve design competition.Thank you to Nanna Koekoek, Louise Mason, Lisa Harker, Ewan and Jones Morris (the Collage College guys): and to Kevin King form Secret 7" for organising it.

Posted by WET PAINT Studio at 19:00 No comments: 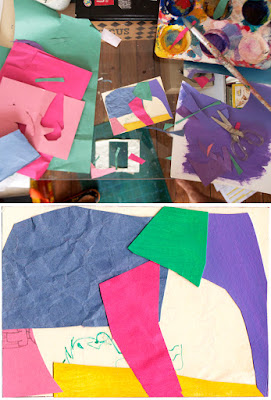 The GREATEST Little Art Show in E17. I agreed to take part in this fundraiser for The Mill E17. The brief: a blank postcard to create a miniature master piece. After considering the idea of a masterpiece, I recalled my favourites and researched others that perhaps aren't but which might make a good starting point. One painting which falls into the former category is The Snail by Henri Matisse, which I remember seeing at Tate Britain when I was very young. It left a big impression on me. I thought it might be nice to play around with scale and reverse the the idea of a very small creature being represented so large by representing a large animal on a small space i.e. the postcard.

Posted by WET PAINT Studio at 09:12 No comments: